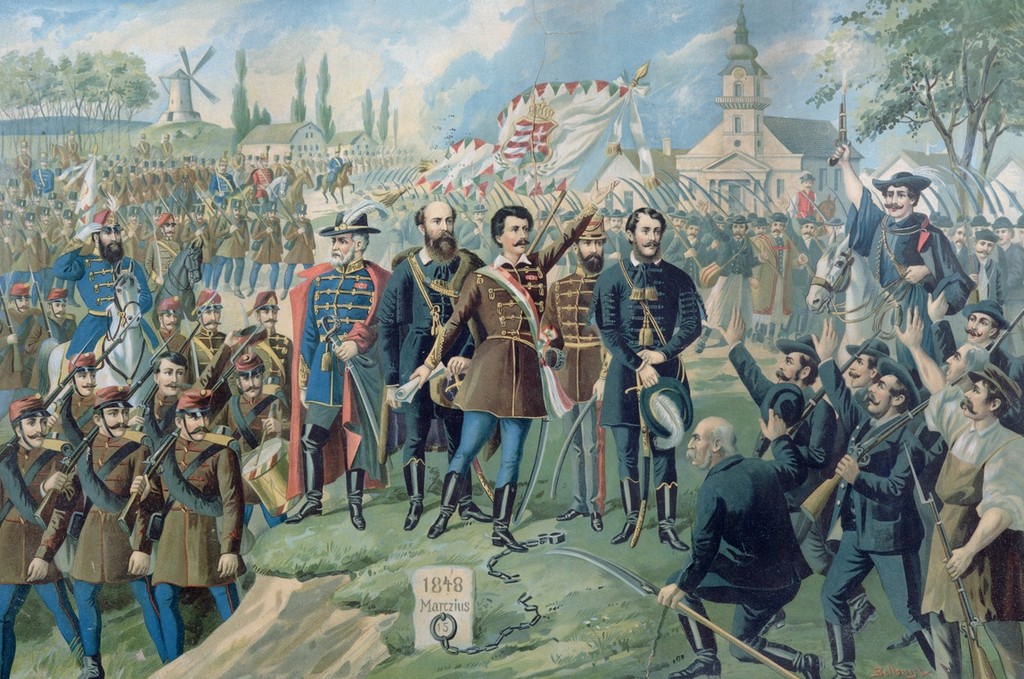 The closing theme of its melody (Éljen a magyar szabadság / Éljen a haza! [Long live Hungarian freedom / Long live the homeland!]) became a national symbol. It was also the signal of the Kossuth channel of the Hungarian Radio between 1957 and 2007, so it did not happen by chance that most of the prohibitions concerned this song starting with the fall of the war of independence.18

The Hungarian army, consisting for the most part of the new conscripts, defeated Jelacic and drove his army out of the country. Influenced by the events in Hun­gary, the court camarilla in Vienna compelled Ferdinand V to abdicate in favourof Francis Joseph I (1848-1916). Under the command of Prince Alfred Windisch-gratz, the offensive against Hungary began, and on January 4, 1849 the imperial forces captured the capital Pest. Gábor Mátray (1797-1875), the prominent music historian and important person for music education in the 19th century, wrote a special diary during the war. On April 19, 1849 he noted a text sung by Austrian soldiers:

On May 5, 1849 he wrote in his diary the following mockery verse that was recitedin the streets in German language by children: 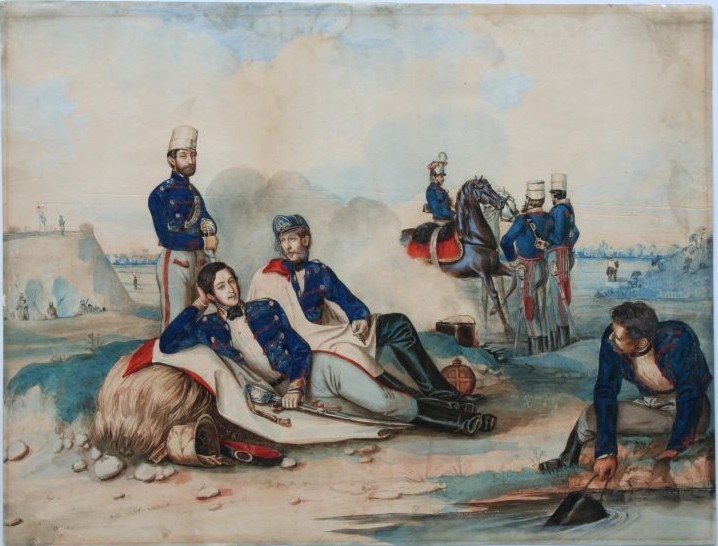 After the occupation of Pest the Government transferred its headquarters from Pest to Debrecen, and Arthur Görgey, the commander-in-chief of the Hungarian forces, led his army through the mountains of northern Hungary. (In Transylvania the Polish Josef Bem was the captain of the army.) Görgey arrived after a brilliantly executed series of manoeuvers on the Upper Tisza, where the army was reorganised and reinforced with newly recruited troops. The Hungarian forces, strengthened during the winter months, launched an offensive in the spring of 1849. Supported by Polish, Austrian, Italian and other volunteers, it drove the imperial forces out of the country after a series of victorious battles. Relevant pas­sages from the diary of Gábor Mátray show that the war was helped by people from abroad, too. In Buda the Tyrolean Major Söll was shot who had fought on the side of Hungarians. His allegedly last words were: “Lebe wohl Tyrol!”21 Following the marked improvement of the military situation, Kossuth - with the support of the radical wing in parliament - enforced the dethronement of the Habsburgs and the proclamation of the independence of Hungary on April 14, 1849.22 He was then elected the Governing President of the country. 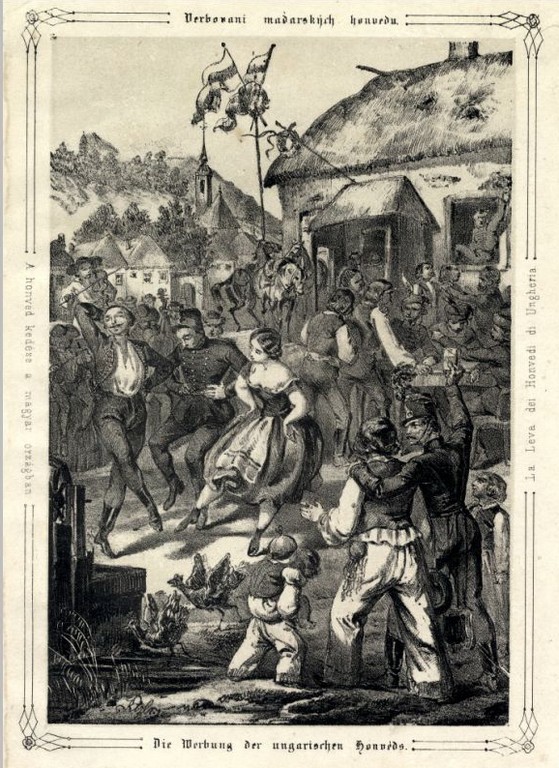 Meanwhile, on the basis of their Holy Alliance, the Habsburg court persuaded the Russian czar to provide military intervention against Hungary. The Hungarian forces were inevitably overwhelmed by the joint offensive of the superior Russian and Austrian imperial forces. In February 1849 Russian soldiers came to Hun­gary. A new song was made: Megjött a levél fekete pecséttel / Megjött az orosz százezer emberrel (We got a letter with black postmark / The Russians are here with a power­ful troop, we have to go into the war). After many battles, the Hungarian war of independence was defeated. The longest European national revolution could only be oppressed in the summer of 1849 by the Habsburgs with the help of the Russian army. The poet Sándor Petőfi was among those who fell in the battle of Segesvár (since 1920 Sigisoara, Romania). The final battle at Temesvár was concluded by the Hungarian surrender to the Russian commander-in-chief, Prince Paskievits, at Világos on August 13, 1849. 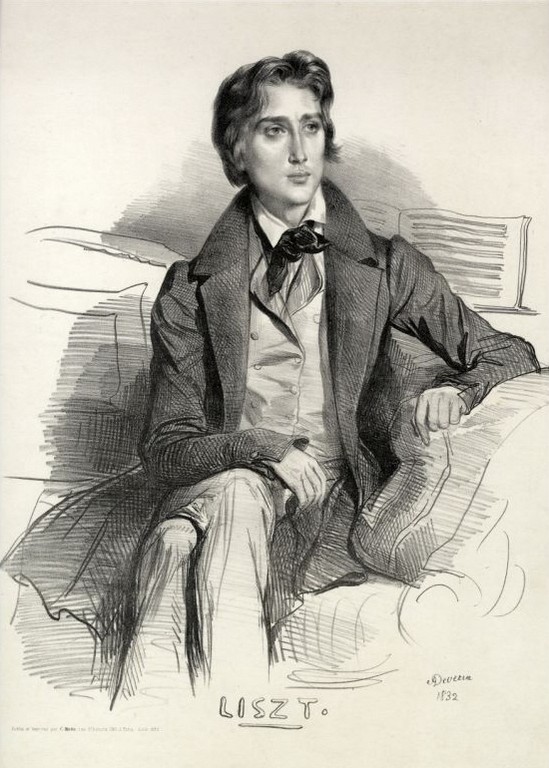 After the capitulation a new song was made: Honnan jössz te oly leverten jó pajtás? (Where’re you coming from with your head so low, my friend? ). György Klapka was the last captain who gave up the fortress of the town Komárom (North-Transdanube) at the end of September.23 A march for Klapka was written by Béni Egressy: Komáromi utóhangok (Epilog from Komárom), which got verses by Kálmán Thaly in 1861.24 The vocal versions in the folk tradition have dif­ferent verses, but were mostly preserved as follows: Híres Komárom be van véve (The famous castle of Komárom is occupied). Kossuth, together with many other leadersof the war of independence, took refuge abroad. He did not give up the noble cause and tried to get international support for the Hungarians there, first in London. He learned English while in prison (1837-1841) and gained an official invitation to the United States. He visited many American cities where he gave speeches to the public as well as before members of the legislature. Although he was very popular and people were eager to listen to him, he still could not obtain support.25 At the end of his life he lived in Torino (Italy) and he was brought home after his death, in 1894. 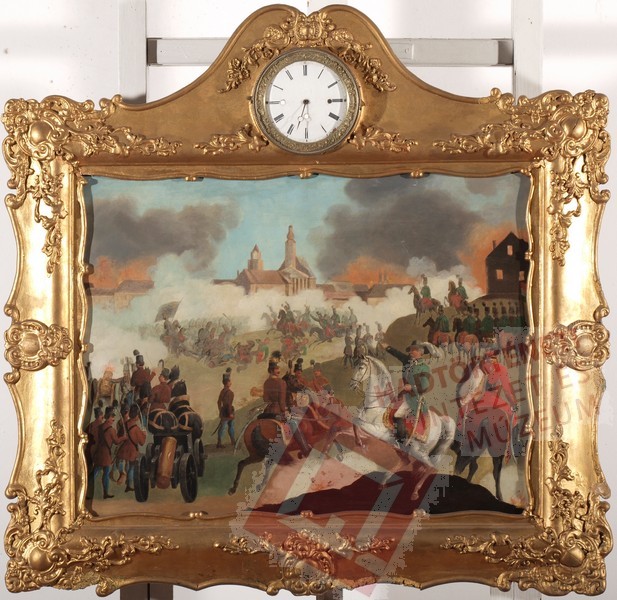 The name of Kossuth was even more adored after his death, as can be seen by the varieties of the Kossuth Song, other folk songs referring to historic events and the songs about his person that emerged in later times. His name and figure were really integrated into tradition, since the words of the known Kossuth Song were connected to former melodies already according to the earliest collections. Béla Vikár recorded on the phonograph a folk song in pentatonic scale and performed parlando rubato in 1903, with the words of the well-known Kossuth Song.26 The melody belongs among those that fundamentally changed earlier ideas concerning Hungarian folk music thanks to the research of Bartók and Kodály. 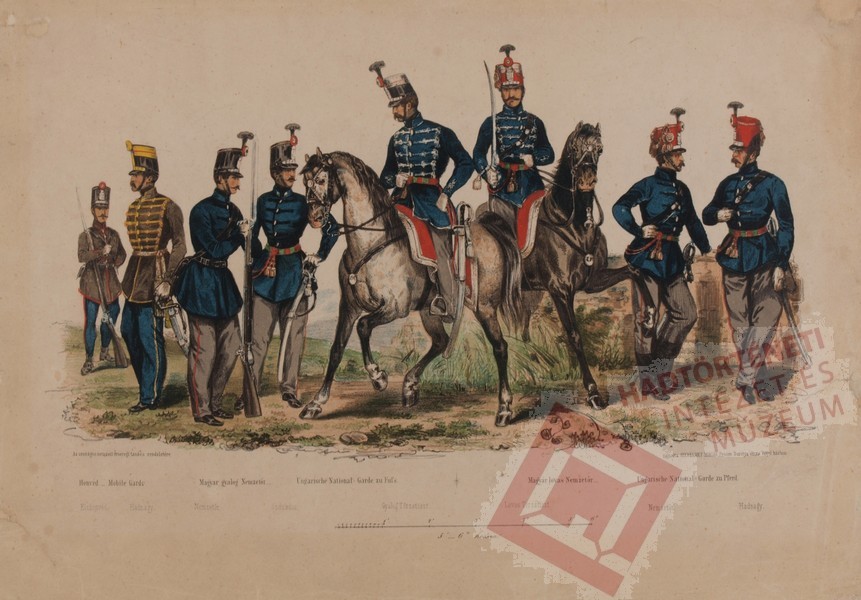 After the war 1848/49 the Austrian General Julius Jacob von Haynau terrorized the country. Thirteen generals were executed at Arad (since 1920 Arad, Roma­nia), Count Lajos Batthyány was shot by a firing squad in Pest, others from the go­vernment in Buda, military courts sentenced thousands to prison and to death, and ten thousands of Hungarian soldiers were forcibly conscripted into the emperor’s army. Ferenc Liszt - who in 1848/49 lived in Weimar - was very deeply affected by the death-rate of his compatriots. He composed the Funérailles (subtitled “October 1849”, with motifs of the Rákóczi March) and the Héroide funébre after the downfall of the war. The singing and playing of Kossuth Song, Rákóczi March and Klapka March was forbidden, but they were used secretely.27 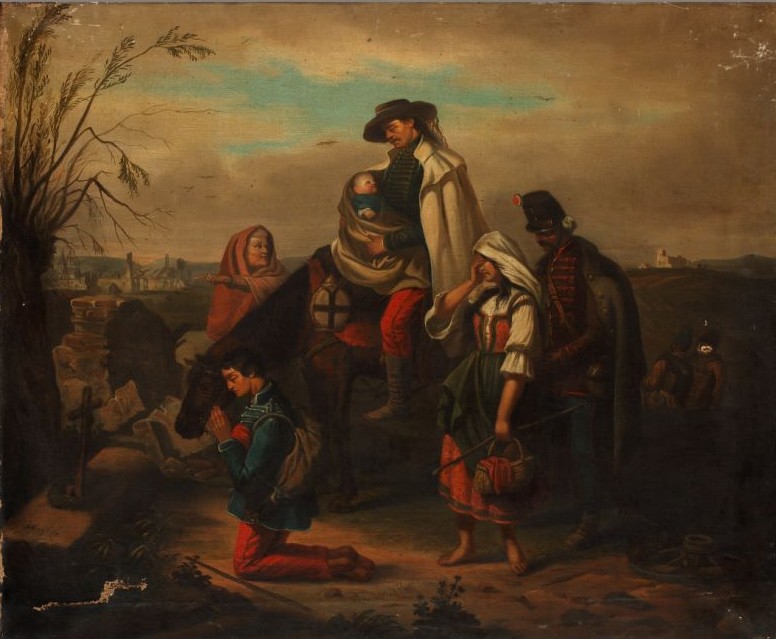 People also remembered the thirteen martyrs of Arad with a historical song after the verses of József Lévai Aradi nap (The day in Arad).28 The Batthyány March by Franz Müller was first published in September 1847 during the glorious phase of reform movement, before the revolution and war of independence. On the cover we find a flag, waving in the wind. The following publication is right from after the war and unjust death of the Prime Minister of Hungary’s first independent government caused by a firing squad on October 6, 1849. This later score is simple in format with a black framing as a sign of mourning, the score itself is featuring a pause after the first five bars and the Hungarian words say: “a shot is happening”.

A reign of terror engulfed Hungary for a long time. After the end of the war, the song Kitették a holttestet az udvarra (The body was laid out in the courtyard), taken from a popular theatrical play from 1847, became very popular. The lyrics were changed to A toronyból sárga-fekete rongy lóg (There’s a black and yellow rag hang­ing from the tower). A compromise with the Habsburgs was only made in 1867, when the double-centred monarchy - called Austro-Hungarian Monarchy - was set up with seats of government in Vienna and Pest-Buda (from 1873 Budapest) un­til 1918, when Germany and its allies, including the Austro-Hungarian Monarchy, lost the world war and the monarchy disintegrated. (Hungary lost two thirds of its land and people became a part of minorities in five different countries.29)

22 Kossuth advanced his “Unabhängigkeitserklärung” on April 13 in a closed session, but the parliament held a meeting only on April 14.

23 The town was divided in 1920, the fortress belongs today to the Slovakian part of the town.

25 Today a statue of Lajos Kossuth stands in Washington, D. C., honoring him as the Father of Hungarian Democracy.

29 6,7 million people were left in Hungary, 1,66 million in Romania, around 1,1 million in Slovakia and Austria and around 600.000 in the Kingdom of Serbs, Croats and Slovenes.